I cut my hair a couple of nights ago. 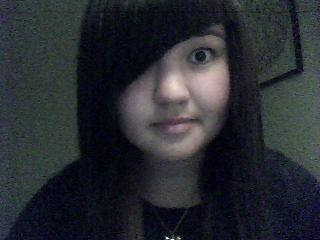 There it is, in all its slanted glory.

Sometimes I stay up too late and when I reach that point beyond tired I feel like nothing's real and I do silly things. This was rather silly, but the nice kind of silly that I don't regret.

I'm almost at that point right now... Almost, but I'll be going to bed soon so it shouldn't get that far.

I also made a bag yesterday. It's rather simple but I like it a lot and I just realized it's the perfect size for my laptop, which is quite lovely. Though I might have to go over some of the stitching to make it stronger if I'm carrying something that heavy (not that my laptop is heavy - just heavier than a wallet and a phone, I mean).

I don't know why I'm writing in this when I know that people don't read it.

I had a nice talk to Austen today. It was fab, but it always is.

Labels: Elisa cut her fringe and therefor the title of this blog is I cut which makes me sound like I am an emo haha