WELL FUCK. It seems fairly obvious now that I am not going to recieve any exciting photos from Fairbridge, so I'm gonna roll with none. Feck, this'll be boring with no eye-candy. I'll try to google some photos perhaps? Nah... Can't find any decent ones... Here's the only one I took all weekend, and it's of Kate. SIGH. 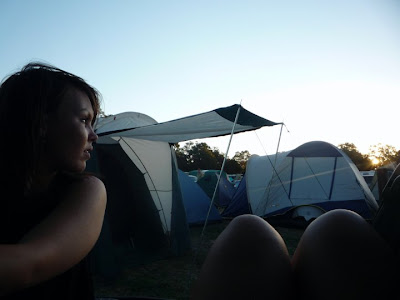 Plus one of me being rad and Katie in the foreground: 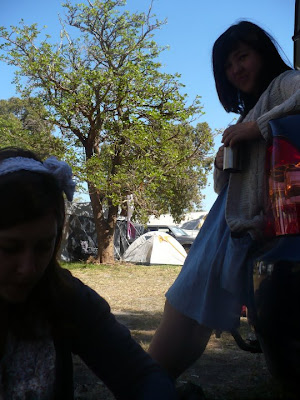 Thursday night saw Kate and I buying supplies. Canned goods, bread and cake galore. Disgusting. Stayed the night at hers in her theatre room (yeah, what a whore, I know). Friday we probably should have set off early, but we didn't. I doubt anyone is surprised.

The drive to Fairbridge takes maybe one hour. We drove with the windows down, so that air pumped through the car and whipped our hair into tangled nests. I stuck my head out and stared at the sky, a huge grin plastered across my face. Life felt good.

Who knows what we did that afternoon. Met up with Mariion (would like to point out that, yes, her name is spelt with one i, but she thinks it looks cooler with two, and I agree ;D), Katie, Elena and Marina. At night we wandered to the outskirts of the area to have a smoke and a giggle. Er, and then? My memorie's turned to sludge.

Saturday we went to the dining hall for drinkies, I bought a huge lolly in the shape of a foot which took me an immeasurable time to consume and we discussed drawing moustaches on each other. Hum.

We then went to some gigs (What? At a music festival? Surely not!). They were good, but the most memorable was certainly Daniel Champagne. I do hope he doesn't read this. Not that I'm going to say anything particularly contraversial...

Half way through Elena, Marina and Kate left on a personal errand (I don't actually know why they went) so Maz, Katie and I were alone. Katie, mesmerized by Daniels crazy guitar skillz and still slightly inebriated, waited until a particularly quiet part in a song to announce "This is AMAZING!" and sent us off into giggles. People probably thought we were rather rude, but Daniel said later that he didn't hear us laughing...

After the show we accosted him backstage - as you do. We told him we had no money so we couldn't buy his cd but what was he doing later? Nothing, he didn't really know anyone, so we invited him to whatever it was we had planned. Somehow Katie managed to suggest that he could sleep outside thier tent. How did this come up? Who knows. He gave me his number.

A while later we found a spot behind some mounds of dirt - class - and I sent off a text to Daniel. He came and found us and we had another smoke. We spent most of the rest of the night hanging out, feasting, smoking, drinking and falling over (in the case of... Who? I will not name-names, you drunkard).

When we were all in Kate and I's (? this can not be grammatically correct) tent, Kate and I had an argument in Danish. She wanted to go home, I said she was drunk etc. She left, and I professed to the tent at large that she would not actually go. She did. A text in the morning confirmed that she was still alive and well, back in Perth.

Sunday I spent with Maz and Katie. I fell asleep in Katies car in the afternoon - I know, terrible effort. We left some time in the evening. Katies car battery was dead, so Maz and I pushed it up a hill, then back down again to push-start it. Great success.

I'm getting sick of writing this now because I can not remember all the exciting bits. My brain is so addled. It was an amazing weekend - what more can I say?

Labels: Elisa thinks that Fairbridge was so amazing and is definitely a highllight of the year so far.